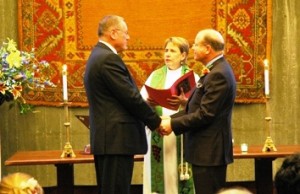 NEWS!!  IMPORTANT UPDATE TO THE FEBRUARY 2011 ARTICLE INCLUDED BELOW:

On Sunday, July 15, 2012, First United voted unanimously to rejoin the ELCA.  The process that preceded the decision included discussions about required changes in the constitution and the future relationship with the ELCA should it remain independent (e.g. assignment of teaching parish students from Pacific Lutheran Theological Seminary and availability of future pastoral candidates).

A congregational forum, facilitated by the Rev. Dr. Rachel Rivers Rivers, a Swedenborgian minister and licensed counselor and spiritual director, helped clarify many of the issues and questions.  We made three lists: ‘What Would We Gain by Rejoining the ELCA,’  ‘What Would We Lose,’ and ‘What Do We Have to Offer the ELCA?’  Finally, the strong sentiment in the congregation was that we wanted to affirm the decision of the Churchwide Assembly which adopted the policy of full inclusion in 2009. We also wanted to do our part in counterbalancing those congregations which have decided to leave the ELCA because of this decision.  First United brings many gifts to the ELCA. This decision in no way diminishes the identity or mission of First United as a voice for progressive Christian values, and instead provides many more opportunities for working for change from within the system.

Now–back to the original article regarding “Defiant Indepence”:

Two San Francisco Lutheran congregations were at the center of a battle of biblical proportions with their national church 16 years ago.
First United Lutheran Church in the Tenderloin had ordained an openly gay pastor in 1990. In Duboce Triangle, St. Francis Lutheran Church had ordained two lesbian pastors that same year. Both actions flew in the face of the policies and beliefs of the Evangelical Lutheran Church in America, and after a five-year fight, the denomination cut the two churches loose.

On Sunday, St. Francis will ratify a proclamation that returns it to the Lutheran denomination. A “Festival of Reconciliation and Restoration” scheduled for Feb. 27 and attended by Bishop Mark Holmerud will mark the occasion.
However, at First United, the Rev. Susan Strouse and her 50-member congregation – who call theirs “the church with San Francisco values” – are mired in a spiritual quandary.

Up in the air

They’re not sure if they want to rejoin, not sure if the wounds are healed.
In the most unkind terms, critics have viewed First United’s reluctance as ingratitude, which is a decidedly non-Christian trait. The denomination’s elders estimate that 350 congregations have defected to a more conservative national flock because of the 2009 vote.

“There are those who say this about forgiveness,” Strouse said. “Why wouldn’t we say, ‘Yes, we’re back. Thank you for seeing it the way we did 20 years ago’?

“And for us, it’s also a question of: What would be the benefit now? If we’re going to a be a more on-the-edge kind of congregation that is willing to push the envelope and not be confined by the church’s boundaries, then does (not being affiliated) make us more attractive to those folks we’re trying to reach out to?”

There’s also the question of what the next Great Debate will be, Strouse said. What progressive position will First United take, and will it bring expulsion?

The question was a familiar one to the Rev. Robert Goldstein at St. Francis. Goldstein said his congregants had debated whether they could be more effective agents of change from “outside of the tent” of the Lutheran Church.

Surprising even Goldstein, his congregation voted 69-1 to work from the inside.

“Once the reason for not being there was gone,” Goldstein said, “we realized we could have a much better influence on change from within. It’s personal relationships that change people and organizations, not doctrines. They get to know you as human beings, and they learn from you. They made some courageous changes, and we’re happy to join them.”

Neither Strouse nor Goldstein presided over their churches when the dispute began two decades ago.

Holmerud said his Sierra Pacific synod, which covers Northern California and parts of Nevada, will wait as long as it takes for First United to make its decision.

When it comes to acceptance of gays, he’s glad that his church followed the lead of the two San Francisco congregations.

‘They took a stand’

“There’s been an acknowledgment that these two congregations were forward-thinking and committed to their ministry,” Holmerud said.

“They took a stand, paid the consequences, and our church has finally seen the wisdom of our opening the rosters to all committed gay and lesbian couples. And we’re all better for it.”

Strouse still holds some concern about the church’s stance toward gay clergy. The 2009 vote came with the provision that gay pastors must be in committed, monogamous relationships. She’d have to overhaul her congregation’s constitution and make sure it fits within the larger church’s bylaws.

“In a way it’s easier getting kicked out, because you don’t have control,” Strouse said. “You can blame them for what they did to us, but now, we have to say what we want our relationship to be with the church.”